When you hear the term “emotional eater,” what do you usually picture? Probably something straight out of a romantic comedy: A sad sap who just went through a bad breakup, blaring depressing music in the background and shoveling heaping spoonfuls of ice cream into her mouth (straight out of the tub). A good friend may come over eventually, equipped with even more junk food, and the “eat your feelings” mentality continues while the rain pours outside.

Surprisingly, a recent study out of the Netherlands proves that we may have it all wrong. Emotional eating has long been linked with negative feelings (depression, loneliness, and anxiety), but Dutch researchers found that emotional eaters (about 75 percent of us) are more likely to overeat when they’re happy. Yep, all the celebratory toasts and “Job well done!” dinners are also contributing to the obesity epidemic. The problem is these often social settings only make us more likely to over-indulge. When you’re in a good mood, it’s hard to step on the brakes and realize that you’re overdoing it. Think celebratory drinks after a big promotion, cupcakes at the office for a co-worker’s birthday, or endless plates of fries after your hometown sports team takes home the championship title.

Now, we’re not against indulging once in a while, but if you’re worried about sabotaging your diet, completely falling off the wagon, or simply want to work toward a healthier lifestyle, it’s a good idea to have some healthier options up your sleeve. To help you stay on track, even during the best of times, we rounded up some nutritionist-approved swaps that you can make for the usual “I’m celebrating!” treats. 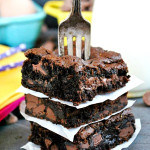 Chocoholics may find it hard to give up this crowd-pleaser, but with a few tweaks, you may not have to. Boulder-based nutritionist Ann Aubin Gibson, M.S., CHHC suggests giving traditional brownies a makeover by “super-sizing” with your favorite protein powder (whey, pea, hemp, rice) to offset the sugar. “Replace grain flour with almond or coconut flour, and use half a cup less than the recipe calls for. Then use protein powder to make up the difference.” She also recommends swapping regular milk for coconut milk and swapping vegetable oil for coconut oil. “You can even reduce the sugar by replacing a portion with mashed ripe bananas, apple sauce, or even xylitol,” says Gibson. If you’re feeling extra adventurous, Yuri Elkaim, nutritionist and author of “Eating for Energy,” recommends giving this healthier brownie recipe based on black beans a go. 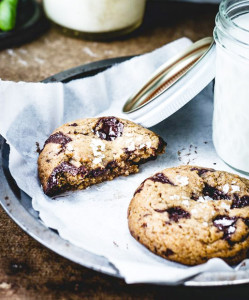 Whether they come pre-packaged on a dessert tray or freshly baked on a platter, cookies are bound to be present if there is a celebration in progress. Elkhaim recommends swapping your usual chocolate chip cookies for these light coconut truffles the next time you’re required to bring dessert for the potluck. Not only do they completely cut out the butter and lower the high sugar content found in traditional cookie recipes and store-bought options, but they’re also super easy to make (no oven required!).

1. Throw all ingredients into a food processor and blend until the mixture becomes smooth and forms a ball.
2. Roll mixture into small balls (should yield about 36) and roll in shredded coconut for coating. 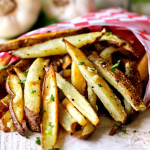 Whether it’s celebrating the win of a championship sports game, a co-workers promotion, or just the end of a stressful workday, salty happy hour staples like chips and dip, and French fries can quickly add up — especially when they’re half off regular price. And while you’re watching the slo-mo replay or catching up with friends, it’s hard to keep track of — or stop — your intake.

Before you fall into the trap, simply swap your usual order of regular fries for sweet potato fries, which are full of vitamins A, B6, and C. The best part about this swap (besides it being delicious) is that this option is readily available in most restaurants and it’s still crunchy and fried — all the characteristics of the perfect happy hour plate! 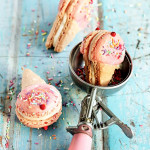 It’s summertime, which means ice cream outings as a treat suggestion drastically spike. If you’re craving this frozen dessert, Gibson suggests making a homemade sorbet instead, by processing 2 cups of frozen berries of choice in a blender with 1 cup of filtered water, 2 tbsp. of flax oil or coconut oil, 1/4 cup of a berry blend antioxidant powder (optional), and 1/4 cup of walnuts or pecans. Add a teaspoon of vanilla extract, lemon extract, ground ginger, or cinnamon to give your dessert more flavor, then pour into ice-cream cups, and freeze.

For a chocolate craving, Gibson suggests making a health-packed Chocolate Mousse by blending the following together in a food processor: 3 ripe avocados, 10 soaked and pitted dates, 1 cup raw cacao powder, 2 tsp. vanilla extract, and depending on the sweetness you prefer, either 1/2 cup maple syrup or 1/3 cup honey, or no sweetener at all. To loosen consistency, add almond, hemp or coconut milk as needed, then refrigerate or freeze and enjoy! 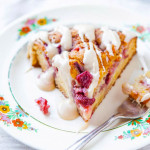 Instead of bringing another store-bought cake for the next office birthday or at-home party, try baking your own. Why? According to both Elkaim and Gibson, small substitutions throughout traditional recipes can make all the difference and allow you to indulge on these treats instead of giving them up entirely. If you’re going to ditch one ingredient, you’ll want to make it sugar. “Instead of using sugar for sweetness (which sends your blood sugar soaring) try using Stevia instead. Stevia has no impact on your blood sugar and thus is much better for diabetics (and pretty much everyone),” says Elkaim. Keep this in mind all the way through to the final touches. “For cakes and cupcakes, make a frosting with coconut oil instead of shortening and coconut sugar instead of regular sugar,” Gibson suggests. “Add a little extra vanilla, almond, or hazelnut extract for a unique flavor and sweetness.” 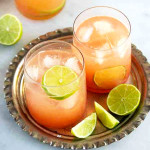 When it comes to celebrating, a few good toasts are in store. But after the first round, it can get harder to keep track of all the calories you’re quickly consuming … especially because it’s in liquid form. Just one glass of champagne (around 4.1 fl. oz.) alone has 91 calories. Instead of working your way up to an entire bottle of bubbly (which rings in at about 500 calories), Gibson suggests stepping on the breaks with Kombucha, Jun, or Water Kefir. “They’re all tart, bubbly, and only mildly alcoholic celebratory drinks, with probiotics to boot.”

If you’re clinking margaritas instead of champagne flutes, you run the risk of drinking anywhere between 200 to upwards of 500 calories, depending on the size of drink your bar of choice pours. When you’re out, skip the salt and stick to sipping tequila over ice with a splash of soda throughout the night; if you’re having the festivities at home, swap pre-made margarita mix with diet limeade or fresh-squeezed citrus fruits.

Who doesn’t want gorgeous skin? It is one of the most desirable signs of beauty and youth. But do you know how to get…