Nothing is more frustrating than sticking diligently to a diet and seeing no results — or, maybe even worse, seeing awesome results only to plateau a few weeks later. But it can be hard to pinpoint what, exactly, is going wrong. So we chatted with Vandana Sheth, registered dietitian nutritionist and spokesperson for the Academy of Nutrition and Dietetics and Cynthia Sass, MPH, RD, author of the New York Times best seller S.A.S.S! Yourself Slim: Conquer Cravings, Drop Pounds and Lose Inches, to give us the skinny on the surprising mistakes people make on popular diets — see if one of these sneaky saboteurs is messing with your weight loss goals. 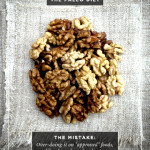 The Paleo Diet: Getting A Little Nutty The mistake:

Over-doing it on “approved” foods

How it hurts: The tenets of the Paleo diet are this: Focus on eating meats, veggies, nuts, seeds, with a little fruit and starch added in. But just because it’s a diet with an emphasis on whole foods doesn’t give you an excuse for a free-for-all. “Anything you eat in excess of what your body needs to support a given weight winds up feeding fat cells — even lean protein,” says Sass.

The most common culprit of sneaky weight gain? Nuts. Though they are heart-healthy, they’re also calorically dense, so, before you know it, you’ve eaten half a day’s worth of calories, says Sheth.

The Fix: Stick to one serving a day, and make sure that it’s an actual serving: about 22 almonds, 16 cashews or 14 walnut halves.

The Weight Watchers Diet: Thinking the Limit Does Not Exist The mistakes: 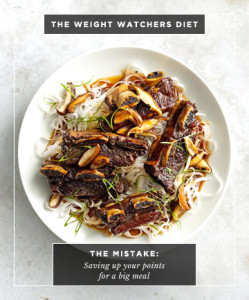 How they hurt: When you go for long periods without eating, you eat away at your energy reserves (like your lean muscle tissue — not exactly what you had in mind while doing strength training at the gym). It can also slow your metabolism way down, says Sass. Then, when you indulge in that huge meal at night, many of those calories will go straight to fat cells because you won’t be burning enough calories to compensate for that meal while you sleep. (Side note: Sass says this is how Sumo wrestlers gain weight, which, I’m assuming if you’re reading this, isn’t your end goal.)
As for the fruit situation, since it has a zero point value, it’s easy to think that the banana you had with breakfast, the apple with lunch and the grapes as a snack won’t really impact your weight loss goal. In reality, these are carb-filled sugar bombs that are sneakily sabotaging your efforts. Sheth advises that a serving of fruit is tennis-ball sized and contains about 60 calories. But keep in mind — fruit is often much larger than that, as evidenced by those colossal apples at the grocery store.

Sass says that, since points are based on fat and fiber content, eating a lot of low-point or no-point foods will result in total carb overload (our words, not hers).

The fix: The first one is easy: Either space out your meals evenly over the course of the day or eat larger meals before your active hours and smaller ones before your more sedentary ones, advises Sass. When it comes to fruit, Sheth says that they can be a part of your weight loss efforts — as long as you eat them in moderation. Stick to one to two servings a day, and try munching on non-starchy veggies instead. 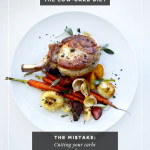 The Low-Carb Diet: A Rebound Carb Binge Fest Waiting to Happen The mistake:

You cut your carbs too low
We’ll admit, this seems like a weird one. If you’re trying a low-carb diet, wouldn’t it make sense that the lower the carb intake, the more effective it is? Not so, says Sass. One, it can lead to intense carb cravings (been there) and result in “rebound carb binge fests” (also been there). Two, this means you’re overdoing your meat and dairy intake, which are concentrated sources of calories and fat, says Sheth.

The fix: “Include small portions of some healthy carbs, like brown and wild rice, quinoa and fiber-rich whole fruit and starchy veggies. I’ve seen people break a plateau or start losing weight by making this switch,” says Sass. Not only do you help curb those intense carb cravings, you also balance out the amount of fat and protein you’re eating. Just remember to keep the portions small, and you’ll be able to burn them all off so that they won’t get stored as fat. 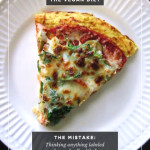 The Vegan Diet: Too Focused on Labels The mistake:

How it hurts: “Often there is a myth that following a vegan diet will naturally cause weight loss,” says Sheth. Not only can eating vegan-approved foods like nuts and seeds add extra calories and fat, eating junk food, just like with any other diet, will lead to weight gain. Yes, even those seemingly healthy vegan donuts and cookies. The fix: Next time you see that vegan cookie, skip it. Or, at the very least, eat them occasionally, and remember to think of them as a treat, not a health food. Sheth says to emphasize whole foods like veggies, fruits, and whole grains and lean proteins like beans and lentils. 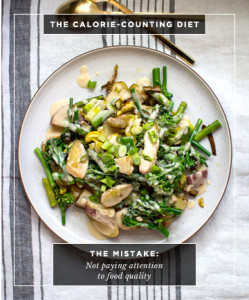 The Calorie-Counting Diet: Not Choosing Quality Over Quantity The mistakes:

Not paying attention to food quality
Cutting calories too low

How they hurt: If you cut your calories too low, simply put, you’re depriving your body of the fuel it needs to function. Sure, you may lose weight at first, but it will eventually slow down your metabolism and you’ll lose calorie-burning muscle mass, says Sass. Plus this can lead to other unwanted side effects, like a weak immune system and trouble sleeping — not to mention dry skin and hair. She also notes that research has shown we burn 50 percent more calories metabolizing whole foods versus processed foods. “I’ve had clients break a plateau or start losing weight by eating the exact same number of daily calories, but switching from processed foods to whole foods, so quality is really key,” she says.

The fix: Swap out those 100-calorie cookie packs for 100 calories of whole food, like nuts, lean protein or even starchy veggies — your waistline (and your taste buds) will thank you. Also, know how many calories you should really be eating. A 1,200-calorie diet is thrown around like it’s some magical weight loss number, but in reality you need a minimum of 10 calories per every pound of your weight goal if you’re inactive, says Sass. That number goes up to 15 if you’re moderately active. To put that in perspective, Sass says if your goal weight is 125 pounds and you are moderately active, you should be munching on 1,625 calories a day. 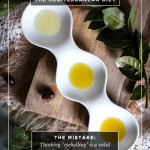 The Mediterranean Diet: In Vino Veritas The mistake:

Thinking “eyeballing” is a valid form of measurement

How it hurts: It’s easy to over-indulge in the staples of this diet, like olive oil and (especially) wine. And if you’re not accurately measuring your portion sizes, the calories add up quickly — especially for olive oil, which can add hundreds of excess calories to your meals, says Sheth. Plus, Sass says that since wine is an appetite stimulant, overdoing it on the Pinot can make you more prone to overeating (especially if you’re trying to eyeball other food measurements). It can also make you more likely to indulge in foods you would steer clear of if you were a little less tipsy (like, say, Taco Bell or your hidden stash of treats).

I love the holidays, and I love playing hostess. But one place where my enthusiasm wanes is in the kitchen. I don’t know about…